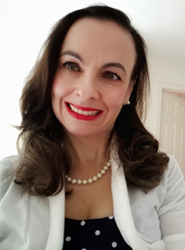 My name is Gabriela Luz Parizzi. I am from Santa Cruz do Sul, a city founded by German immigrants in the southernmost state in Brazil, Rio Grande do Sul. The state of Rio Grande do Sul is bordered by Uruguay and Argentina, so its inhabitants are called gauchos, and the state has a gaucho culture as its foreign neighbors as well as German, Italian, Portuguese, and Spanish culture and traditions. This region is very rich linguistically: Portuguese, German, Italian are spoken, and the dialect in the region has also suffered a strong influence of the Spanish language. Growing up in this environment made it for me to decide to major in languages. I have a Bachelor's Degree in Languages/Translation (Portuguese and English as a major and Spanish as a minor) from the Federal University of Rio Grande do Sul, Brazil. I continued my studies in English at the International House English School in London and my studies in English and Spanish at the College of DuPage in Glen Ellyn, IL. I also have a Master's Degree in English as a Second Language (ESL) Education from The University of Tennessee (UT) and a Graduate Certificate in Linguistics (Spanish) from The University of Tennessee. I am married and I have two daughters, and my hobbies include singing and dancing ballet.

The flagship campus of the University of Tennessee System and partner in the Tennessee Transfer Pathway.